Bangla blogging was many days’ dream, but due to bureaucratic problem, it took time. No problem, it’s good that, finally it started. SHAON84 launches Bangla Blog in country’s most popular blog community, SomeWhereIn Blog. It may take some days to have the privilege of posting posts on first page from the SomeWhereIn Blog authority. But it’s visible and that’s the good part. 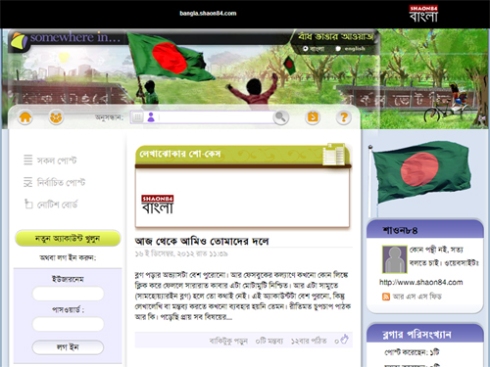 The site can be reached from sub-domain of SHAON84: bangla.shaon84.com. The blog will show-up with posts on diversified areas mainly: Politics, Religion, Business, Marketing, Business Research, IT etc.

SHAON84 launches a new subsidiary portal, ‘Uncodist’, an unique name in Google Search. Hosted in Google’s Blogger, Uncodist is the second blog after SHAON84 Official Blog (current one). More blogs are on the way to come, hopefully launched by this December 2012. However, Uncodist is a website, rather just been called as a Blog. 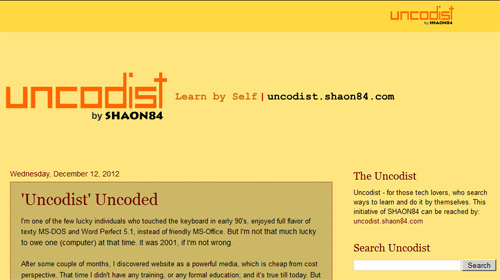 Uncodist mainly will publish technology related ‘Know-how’ articles. The major difference comparing to other regular tech blog will be, it’s more friendly, well formed and well informative enriched with relevant material. The first article of the site describes the background and other matters. Uncodist is under the PenNPaper, a major section of SHAON84.

After around eight years, SHAON84 finally started releasing photographs snapped since 2008 (all photos taken by Shaon). In this December 2012, SHAON84 will release all (as much it’s possible) selected photographs from 2008 to till date! For that a update campaign has been launched, titled: “SHAON84 Photo Release (2008-2012), 30 Updates + 1 Bonus”

According to that campaign from December 1 – 30, at least one photo will be uploaded to its Facebook Page, where all SHAON84 photos will be hosted. This is a great starting for SHAON84.

About 1 Bonus
1 Bonus will be another special update at its Flickr Account (not disclosing new account URL) which will contain the best photos of SHAON84. The photos will be chosen based on response from Facebook Page and Shaon’s choice. The last update would be available on 31 December 2012.